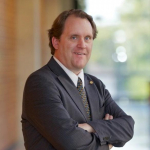 Dr. Neal M. Davies received his undergraduate degree in Pharmacy from the University of Alberta in 1991. In 1996, he completed his Ph.D. in pharmaceutical sciences, specializing in pharmacokinetics, at the University of Alberta. From 1995 to 1998, he undertook postdoctoral training in pharmacology and toxicology at the University of Calgary. He then joined the University of Sydney as a lecturer in 1998. In 2002, he returned to North America to join the Washington State University’s (WSU) College of Pharmacy as an academic staff member, where he has held the positions of Director of the Pharmaceutical Sciences Graduate Program, as well as Director of Professional and Undergraduate Research and Director of Summer Undergraduate Research Fellowship program. He has been active on numerous university-wide committees, including service as a member of WSU’s Faculty Senate and Chair of the Institutional Animal Care and Use Committe. From 2011-2016 he was Dean of the Faculty of Pharmacy at the University of Manitoba. Under his direction he has been involved in several administrative and operational initiatives including: strategic planning, faculty accreditation review processes; and development of a first professional degree in Pharmacy (PharmD) program. He played key roles in faculty and graduate student recruitment and success and development of Pharmaceutical Analysis Laboratory (PAL). Throughout his career, Dr. Davies has strived to maintain the highest standard of teaching and research, and his achievements in both areas have been recognized through numerous awards and honours including several from the United States Pharmacopeia and the Canadian Society of Pharmaceutical Sciences. He has taught at the undergraduate and graduate levels, and has an ongoing and significant commitment toward
graduate supervision and training. He has been at the forefront of the use of technology in the classroom, has re-engineered curricular content and maintained a high standard in student mentoring. Dr. Davies also maintains an active and highly collaborative externally-funded research program, focused on pharmacokinetics and drug delivery as well as basic and clinical pharmaceutical sciences which have attracted National Institutes of Health and Industry funds. He holds five patent applications and has disseminated his work broadly through numerous journal publications, a book and book chapters, abstracts, and invited conference presentations. He has ~8000 citations and an H-index >50. Dr. Davies has been a registered pharmacist with the Alberta College of Pharmacists since 1991. He is active in numerous professional organizations/associations, including the Canadian Society of Pharmaceutical Sciences and the American Association of Pharmaceutical Scientists, and serves as a reviewer and on the editorial board of several pharmaceutical and pharmacological science journals. Over the past decade Dr. Davies has also been heavily involved in pharmacy education research including curriculum mapping, interprofessional education, online teaching, and implementing expanded scopes of practice programs. On September 1, 2016 Dr. Davies commenced his term as Dean and Professor in the Faculty of Pharmacy & Pharmaceutical Sciences at the University of Alberta.